“As remarkable as the wines at Fairhaven are, the cultivar hybridization and improvement research is even more so.”
Sincerely,
Paul Gambrel 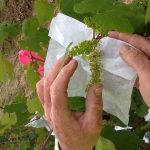 The originator must have a great fund of enthusiasm, and an ambition to add something to the general fund of human development for the benefit of the world at large, and, that he may reap some personal compensation, or enjoyment, he must have an intense love of close communion with nature, causing him to admire the infinite correlated life movements; to study the loves and hates prevailing in all organic life and growth, discovering the great fundamental truth in ethics, as well as in the development of organic beings, that love breeds life, hate breeds death. Such a spirit of investigation leads the student of biology, especially when working in this field of the most practical application of the principles of biology,  to the contemplation of the all binding energies and impulses belonging to, and circulating through, by mutual reciprocation, influencing and controlling all objects, thus creating the best concept of the Self -Governed Infinite.

Fairhaven has expanded its famous collection to include all five of the existing types of Lenoir. These types are the original Lenoir (Black Spanish or more correctly the Blue French), the Favorite (a hybrid of Herbemont and Lenoir), the Herbemont (the Brown French), the Jaquez, and the Rulander (Lousinana Bourquiniana).

This extraordinary group of vines is divided into two subclasses, the Type “A”, represented by the Lenoir, the Jaquez,  the Herbemont, and the Favorite. This group is characterized by its deeply lobed leaves and larger compound clusters.

Recent DNA testing has shown the Jaquez to be synonymous with the Lenoir but retains an important historical significance due its dispersal from the European continent. Fairhaven has preserved the pure genetic line originally sourced from France in the 1800’s.

The Rulander is the only known survivor of the “B” Type Lenoir. It differs from the “A” Type by having foliage that is shouldered (only slightly lobed), and simple clusters.

The field trials conducted at Fairhaven over the last four years have revealed that the Rulander is capable of producing juice chemistry that is slightly better than the standard Lenoir, and displays greatly improved resistance to pathogen attacks on the fruit clusters. Rulander’s heat, drought tolerance is in line with the rest of this genetic group. It is also highly tolerant of Pierces Disease.

We feel that this rare vine has a bright future for production of quality juice in the more humid regions such as those in south Texas, Lousinana, and the rest of the Deep South.

Fairhaven has begun aggressive production of the Rulander and we hope to have the vine available in good numbers by mid-2016.

“After educating myself for the work and making such extensive preparation for the origination of varieties, which were essential to vineyard culture, to enable it to fill its entire sphere, few persons regarded my effort otherwise than that of a “crank”, and often I have heard myself mentioned as the “vine crank” This, to me, was good evidence that my object was not comprehended; that the special knowledge necessary to comprehend it, and become interested in it, was lacking generally among grape growers and even among  the majority of writers upon grapes.”

From: The Investigation and Improvement of American Grapes at the Munson Experiment Grounds near Denison Texas From 1876 to 1900 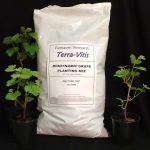 Terra Vitis was developed after a decade of field trials by the staff at Fairhaven. This proprietary soilless mix contains Spagnum peat, organic compost, medium pine bark, and sand. The ratio of components are designed to assure a balance of excellent drainage and aeration in a wide range of native soil types.

The most important aspect of this high tech mix is the revolutionary Biodynamics of the product. Terra Vitis contains both Humate Complex and Mycorrhiza to create the optimum root soil interaction.

Mycorrhiza is a naturally occurring soil fungi that acts symbiotically to aid in strengthening the vines drought tolerance, increasing transplant success, and mitigating contaminates in the native soil.

The addition of Natural Humate Complex aids in increasing the ion-exchange characteristics of the soil and furthers the untilization of nutrient additions to the planting site. Humate plays a critical role in soil structure by the formation of  Organo-Mineral Bridges to the surrounding aggregates.

To round out the top perofrmance of Terra Vitis, Fairhaven includes measured amounts of our specialty Grape Fertilizer ,Vitis Max. Vitis Max is a long acting, specially taylored, Organic nitrogen source, with balanced amounts of Phosphorus, and Potassium.

Terra Vitis planting soil is mixed at the planting with the native soil at a rate of 1/2 cuft per vine.